DID YOU KNOW, ONCE SRK FOOLED GAURI ON THEIR HONEYMOON!!!

It's not a hidden fact that Shah Rukh Khan never falls short of stories to narrate from his experiences in life, does he? Most of them, of course, are highly inspiring and makes you want to follow his path but this one instance from his early days of marriage with Gauri Khan is instantly going to crack you up!
So for all that you know, SRK wasn't born rich. He had his own share of struggles before becoming the King Khan of Bollywood. Say for that matter, even when he got married to Gauri, he was earning so low that he couldn't even afford their honeymoon. But you will be amused to know how he conned Gauri by promising her that he'll take her to Paris and ended up in Darjeeling instead. Check out the picture below; 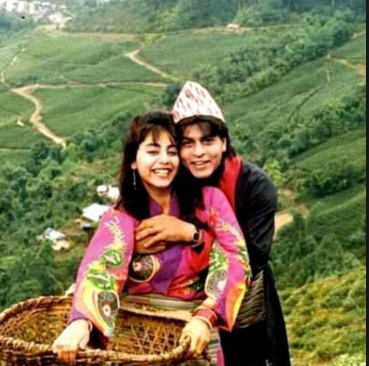 Shah Rukh himself made this candid revelation during the HT India's Most Stylish Awards 2019 that was held recently. SRK and Gauri were awarded with the title of being the Most Stylish Couple. However, Vicky Kaushal, who was hosting the event, further decided to make them recall some of their priceless moments spent together by showing a few throwback pictures. And there....as soon as their first romantic pic from Darjeeling flashed on the screen...SRK couldn't stop himself from making an honest revelation...
"This is my favourite picture...When I got married, I was very poor while Gauri was middle class, well to do. So like how usually everyone does, I had promised her that after we get married, I'll take you to Paris and show you the Eiffel Tower. But obviously it was all a lie because neither I had the money nor I had the air tickets but somehow I convinced her. Finally, we were heading to Darjeeling to shoot a song for Raju Ban Gaya Gentleman. And I felt that considering even Gauri hasn't travelled abroad she wouldn't know much so main usko Paris bolke Darjeeling le gaya. Yeh humara honeymoon hai....20 days after our wedding.."
Just how adorable is this power couple? Write to us in the comments section below.
ALSO READ:-