We have often complained about our cab drivers taking the long route before reaching us, resulting in a massive delay. Well, that's the only problem, to begin with - explaining to them how to reach and where to reach also accounts for someone of the very common pet peeves. 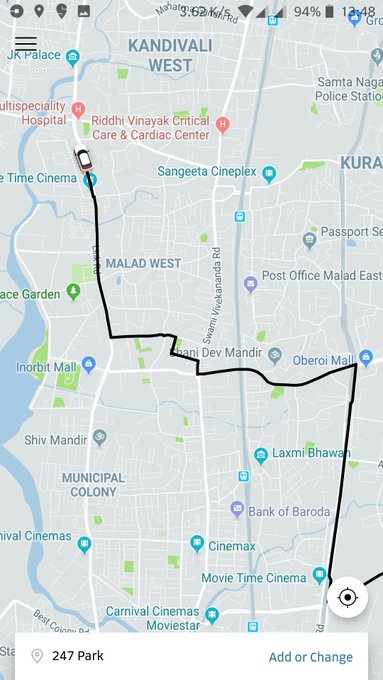 But this Mumbai guy had another level experience with this Uber cab driver.   Twitter user Preshit Deorukhkar shared his personal experience of booking a cab with all of us and sent us down the laughter road. In his tweets, Preshit claims that his Uber driver started the ride long before he picked him up. Just when that happened, the guy followed his Uber driver on the app and narrated a funny story of his whereabouts and this is no less than a joke. The guy first tried to reach his driver but his cell phone was out of reach, it is only then when he decided to track his location on the app. [caption id="attachment_43338" align="alignnone" width="335"]

source[/caption] a series of tweets posted by him read; 'Pickup was in Malad West. Driver has now reached the edge of north Mumbai. I'm assuming he has to dump something in the khaadi.' [caption id="attachment_43343" align="alignnone" width="274"]

source[/caption] Preshit was charged rupees 857 for a trip which he never took. When he escalated the issue with Uber, the brand was quick enough to refund the money. They also said that they have taken a notice of driver's behavior and will follow reflect this on driver's partner's profile. It's really hilarious to see such stuff coming, did you ever faced this kind of situation? do let us know in the comments section below and for more stuff like this keep visiting gabruu.com