ROHIT SHETTY BEGINS WITH THE PRE PRODUCTION WORK FOR 'SOORYAVANSHI'

Fresh off the success of Simmba, director Rohit Shetty has begun working on his next project which is titled as Sooryavanshi. Rohit shared an Instagram picture of himself with his crew members as they headed to Goa, to begin with, the preproduction work for this upcoming flick. His Simmba star, Ranveer Singh, expressed his excitement in a comment.
“Mission Sooryavanshi. En route Goa,” Rohit wrote alongside the picture, which shows him posing with his team in the jet bridge. Ranveer, who recently worked with him in the movie Simmba wrote in the comments section, “Oho hard company. Picture shuru.” 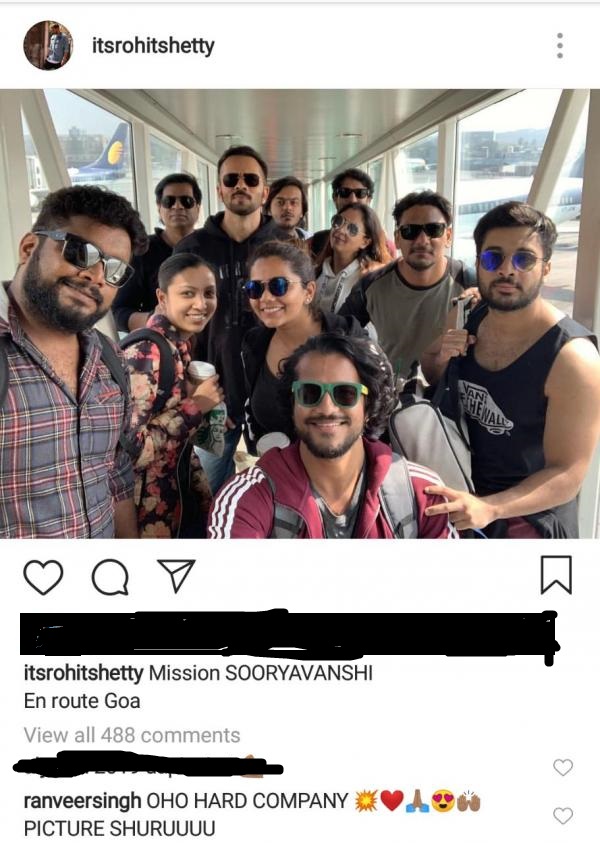 Sooryavanshi is the next installment in Rohit’s interconnected cinematic universe, which began with the two Singham films and continued with his recently released film Simmba. Akshay Kumar will play the central role in Sooryavanshi, who’s small glimpse we had in Ranveer Singh and Sara Ali Khan starrer Simmba, which also featured Ajay Devgn in a pivotal role.
All the three actors took to the stage along with the director Rohit Shetty at the recent Umang 2019 event, an annual celebration organized by the Mumbai police, which sees several Bollywood stars in attendance.
With a worldwide total of Rs 400 crore at the box office, Simmba is inching closer to Rohit’s biggest film, the Shah Rukh Khan-starrer, Chennai Express. The film is Rohit’s highest domestic grosser, with collections touching the Rs 240 mark.
Ranveer will next be seen in Gully Boy, directed by Zoya Akhtar, the film is scheduled for a February 14 release. The film is set in Mumbai’s underground rap music scene and also stars Alia Bhatt.
Akshay, who is currently shooting for Karan Johar produced Good News, is expected to join the crew really soon. The actor has one more film in his kitty which is Mission Mangal. The film will also be featuring Vidya Balan in the lead.
ALSO READ:-