The first day of school and the memories that come along with it are simply blissful, aren't they? Those crisp new uniforms, first photos of going to school, starting a new life and posing in them is an altogether a new experience.
Do you remember your first day of school? Well, while some of us are totally happy and excited about attending school, most of all are grumpy stepping out of our house for the first time and staying away from our parents.
Well, one of the most adored B-town babies are having the day of their lives. The ones we are talking about are none other than Karan Johar's little munchkins Yash and Roohi are going to enter an important phase of their life with the first day of school today and to mark the occasion just like any doting dad, the director and a producer shared a post on his social media handle.
Yash and Roohi are looking adorable with their hair combed back with their little bags on their back. While his daughter looks happy to attend the school and has a smile on her face,  his son Yash looks grumpy and has his straight face mode on. Take a look at the adorable first-day photos shared by Karan Johar on his Instagram handle here: 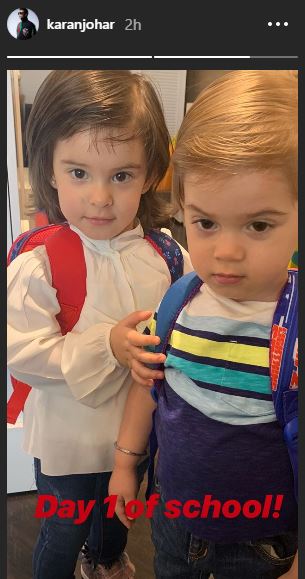 On the work front, Karan Johar is all set with his latest production Simmba. The director-producer released the official trailer of the film yesterday. The trailer had a glimpses Rohit Shetty’s Singham which was released back in the year 2011. The film starred Ajay Devgn and Kajal Aggarwal in the leads.
To our surprise, we had Ajay Devgn in this two minute fifty-five seconds trailer. Well, seems like Ajay Devgn will be doing a cameo in this film. The film will hit the screens on 28th December.
ALSO READ:-

INAAYA NAUMI KEMMU'S THIS PICTURE IS TOO CUTE TO HANDLE